Slavic paganism was filled with a special sense of harmonious coexistence of man with nature. The Slavs believed in gods and spirits, giving them gifts, made sacrifices. Possible if not for the geopolitical necessity of the adoption of Christianity, Slavic paganism has grown into an independent religion with its ritual and traditions. In our small study presents the most unusual pagan rituals of Slavs. 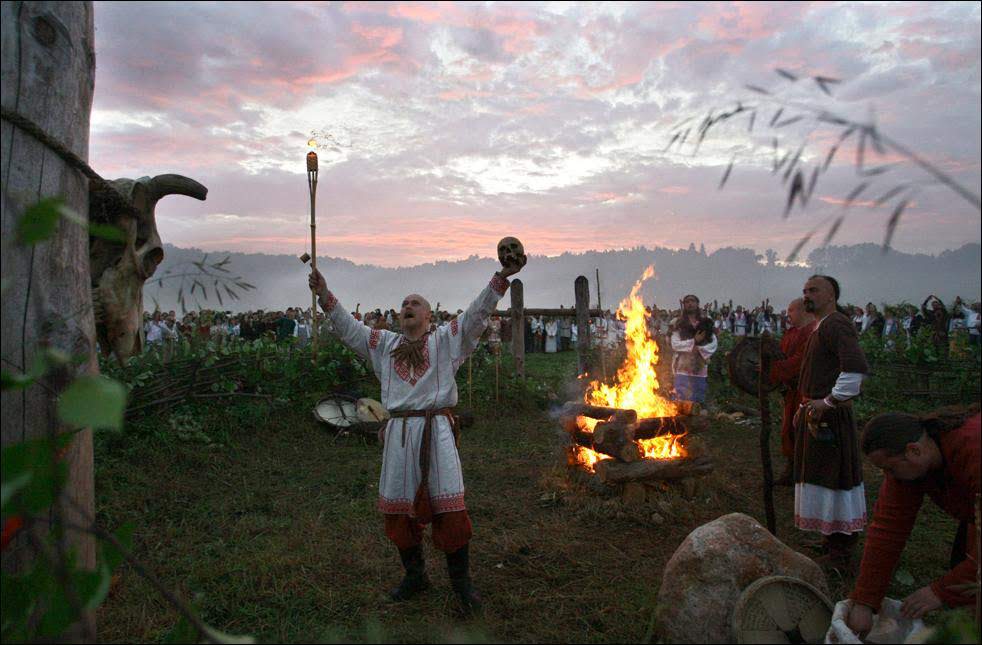 Our ancestors seriously approached the question of choosing a name, because it was thought that it kind of amulet. Wise Slavs, to provide the child with the good fortune several times gave his child a name.
The first was given by the father at the birth of a child. Pererub the cord, he showed it to the sun, called a name, introducing, thus, the child with the heavenly body. Second name gave the priests upon reaching 12 years of age. Temporary baby name washed in Holy water.
Changed names and girls who married. They washed past life in the river or lake, and also in the Temples. Young men, having made the feat, or on the verge of life and death, could also change the name, but only in flowing water.
Speaking of the most beautiful lakes of the world on our website hotshot.eu.org there's an interesting article.

In contrast to the "barbarian" Europe, the Eastern Slavs paid great attention to purity, and because there was a special bathing ritual.
Before him it was necessary to appease the spirit of the bath, so-called swab, and at the entrance to give him a low bow. Then read the plot and after reading it on the stone, pour a bucket of water. Broom evenly disperse steam across the room.
To wash in the bath was a kind of purification of body and soul. The broom was considered Central to this rite, as with its help it was possible to cast out devils from the body. Knowingly broom was called a master, invented a lot of sayings. "Broom in the bath is more valuable than money", "Bath without a broom, like table salt" and others.

As soon as the snow melts, the Slavs carried out the rite of umykanija of the earth. It was believed that the keys are in Vernal Egory, it asked to open land.
Whole populations came out in the field, chose the guy and named him "George". His clothes were decorated with green branches, gave a hand torch, and on her head put a round cake. With that the leader went around the field and asked them to unlock the land for fertility, and to protect cattle from disease and illness.
In some villages it was customary, when Yegoryev day women naked riding in the fields. At this, saying: "as we ride, so let the bread rise". On the same day consecrated the water in the evening, staged a cheerful celebration.

It is known that the mermaids are in water, they become mermaids unmarried girls who drowned or did not die a natural death. In some Slavic tribes were of the belief that mermaids, in addition to water, can live under the ground.
A week before Trinity (Green holidays, Semik or whit Monday) they came out of the waters, and settled in the forests and groves near dwellings. It was a special time, when not encouraged to leave home to walk alone in the woods and in the field. Grazing was not allowed and the livestock.
It is believed that at this time a mermaid can get a man or to take his soul. Especially afraid of the mermaids girls and women, because trying these days not to run the household. Didn't bake bread, not washed, not cleaned in the house. The week was considered a holiday, because in the evenings staged celebrations with dancing, round dancing, jumping over bonfires.

In a series of funeral rites of the Slavs, the feast holds a special place as was arranged in memory of the fallen soldiers. Consisted of a memorial feast, but also organized games, competitions in memory of the dead warrior.
The tradition to arrange the funeral feast is rooted in antiquity, and therefore retained multiple archaic features of the burial rite. Primarily, held the funeral feast in order to ward off evil spirits from living people. The word "feast" indicates the range of activities. This ablution of the deceased, his dressing with subsequent burial or cremation.
To penetrate Christian traditions of Russia, the Slavs of the dead were burned on a special platform — krad. Was a tradition to bury or to burn in the boat.
Also read: 10 ways how to gain immortality.

Many traditions are mentioned in the Russian Chronicles after the adoption of Christianity, and Orthodox holidays have preserved elements of the ancient pagan traditions. The Slavs are clearly separated the world of the living and the world of spirits, in which it was forbidden to enter ordinary mortals. The religious concepts of the Slavs is widely represented in Russian folk tales and fairy tales, where the main is displayed the philosophical meaning of life — the eternal struggle between Good and Evil.