The main attractions of Dubrovnik

A beautiful city, and also one of the best European resorts, nestled on the shores of the Adriatic sea, in southern Dalmatia. The Croatian town traces its history from the VII century and until 1918 was called Ragusa. 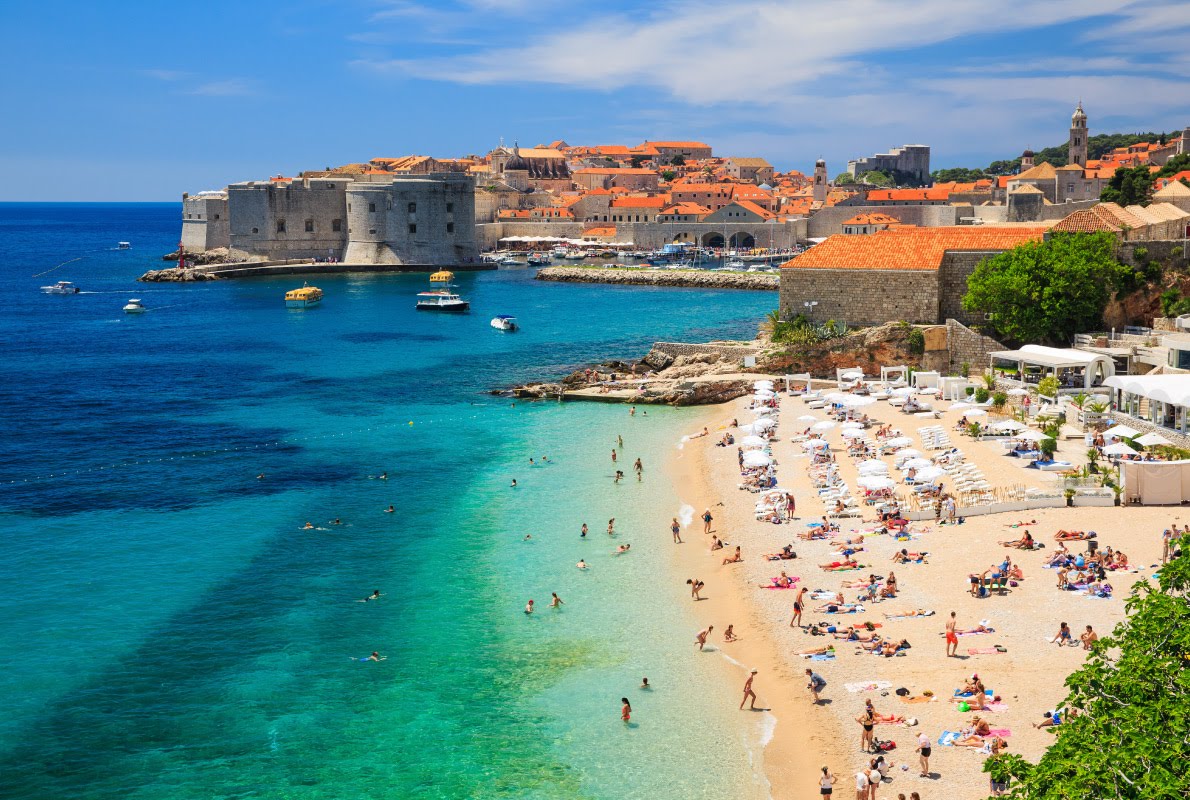 The city has preserved many historical monuments, and recent history gave him a lot of great places, so popular with tourists. Get acquainted with the town closer, and imagine the most beautiful sights of Dubrovnik.

The Island Of Lokrum

The unusual name of this island situated near Dubrovnik, was given to the Benedictine monks. They were raised in the vast island of trees with sour fruit and the word "acrumen" were transformed into Lokrum means "sour fruit".
Famous city with 1023 year, when the monks founded the Abbey, the remains of which have survived to the present day. Additional area attractions include Fort Napoleon, built in 1806.
The island is shrouded in many legends, one of which is in a shipwreck on its shore, landed the English monarch, nicknamed Richard the Lionheart.
By the way, about the most beautiful Islands in the world, You can read one of the articles on our website hotshot.eu.org. 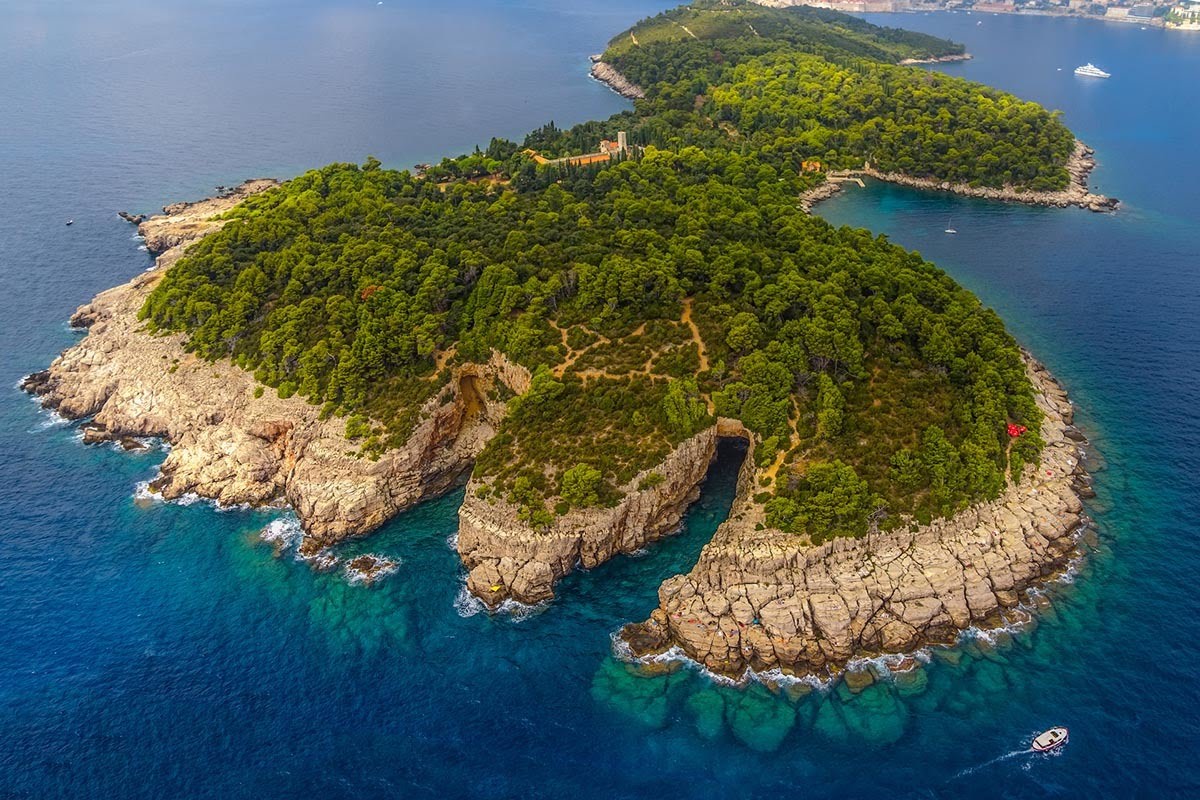 Around the historic part of the city preserved defensive walls, the construction of which began in the seventh century, and their final shape they have acquired in the XIV century.
A unique monument of the fortification stretched for 1940, and its height in some places reaches 25 m. From the sea the width of the walls ranges from 1.5 to 3 m, on land of the stone giants reach widths of 6 m.
The architects ' skill test the strength of a strong earthquake in 1667, during which the wall stood and today the interest of researchers and tourists. 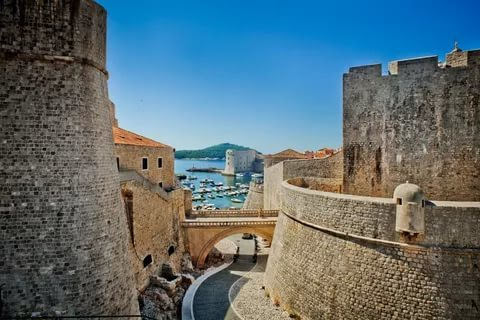 The Fort, part of the city defense system, built under the personal supervision of Michelozzo di Bartolomeo, and its construction has spent 80 years.
The main function of the bunk of the fortress was to protect the city's main gate, the moat and the bridge leading to the city. Adorns the building is a unique stone tiara, erected at the top of the Fort.
Experts agree that the Fort is one of the most beautiful fortifications of Europe, perfectly fit into the overall protective system of Dubrovnik. 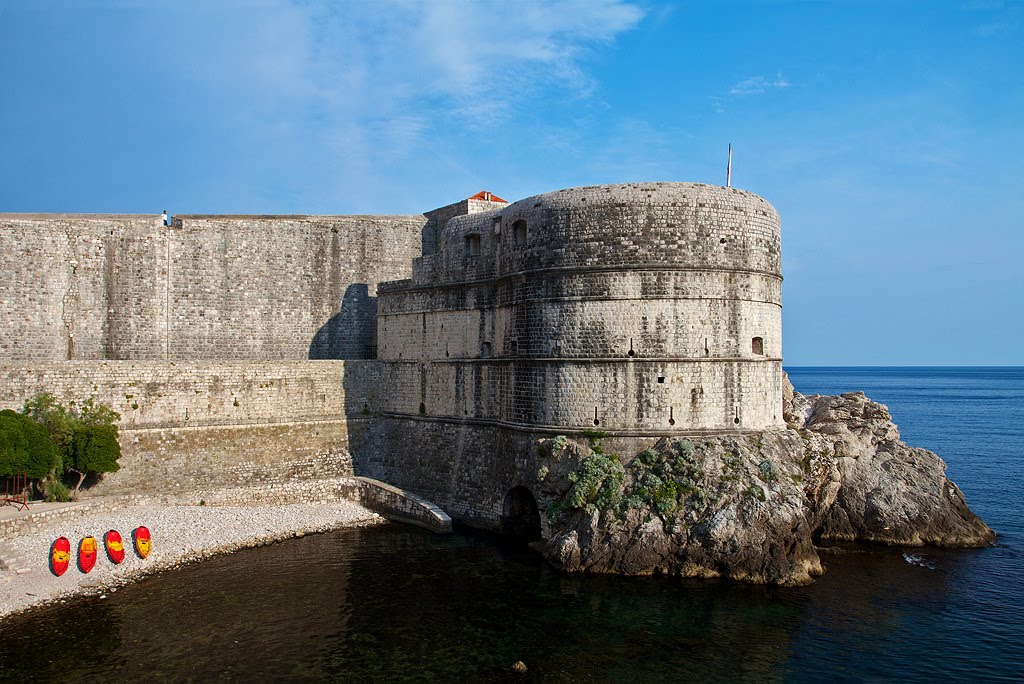 Go to the Old town and consider the architectural features of the magnificent Palace, built in Gothic style in the early sixteenth century.
It is the area of the Lodge, which is a favorite place for walking tourists. At different times in the beautiful Palace was occupied by various institutions. Original custom. Then the Treasury, the Bank with the mint and even a school.
Now this is an archive, which contains unique historical documents and rare manuscripts. On the square in front of the architectural marvel of the Renaissance is held annually Dubrovitsky summer festival, drawing thousands of participants. 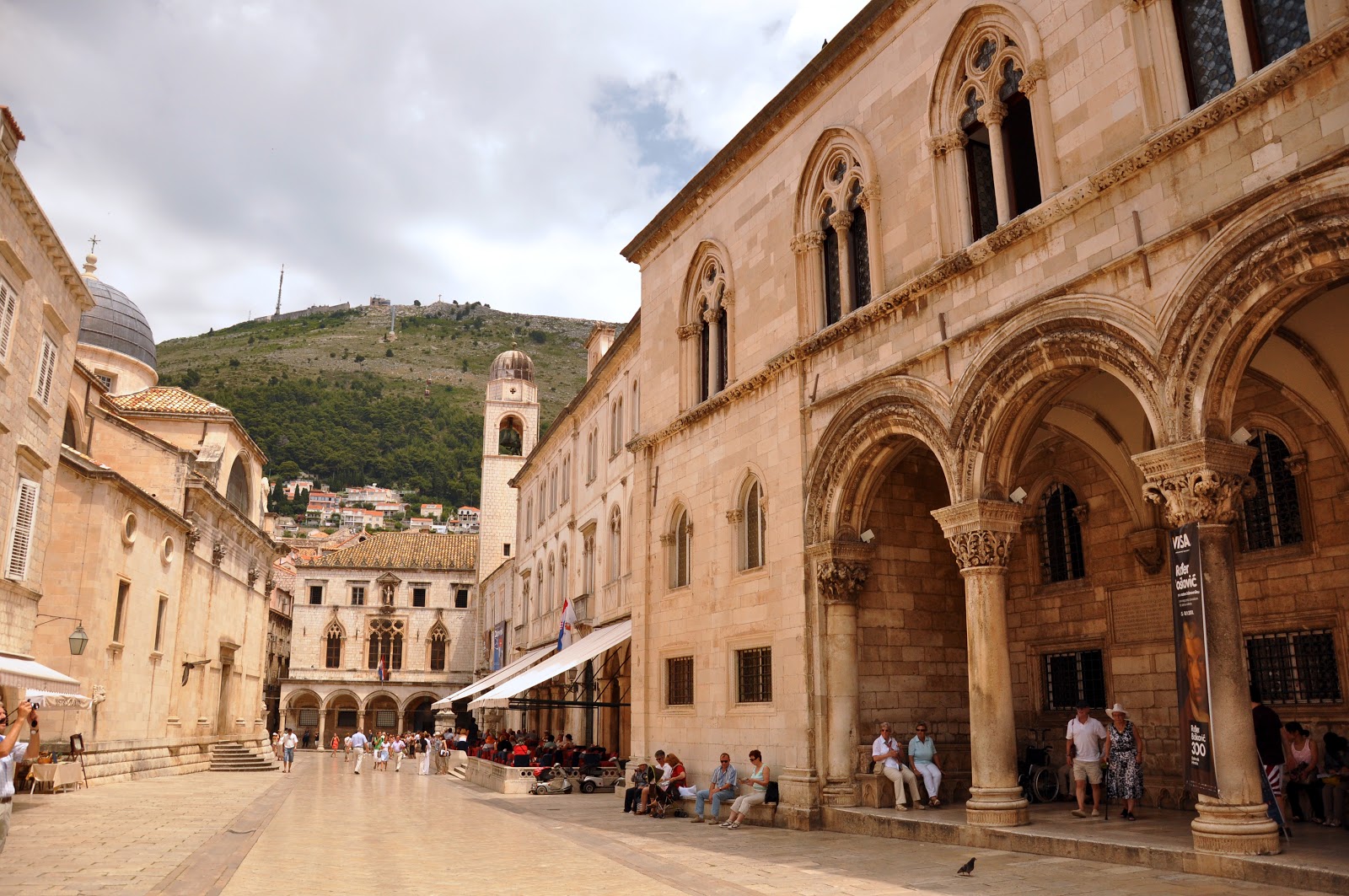 The project has developed a Church renowned architect Ignatius Pozzo, and it was built from 1699 to 1703. Now it towers over the Piazza Gundulić.
Completed the construction and final finishing by 1725, and the sanctification was in 1729. Funds allocated for the construction of one of a kind, Gundulic, but died before the laying of the first stone.
Adjacent is the Jesuit College, and a long stone staircase connects Piazza Gundulić square of Rudjera of Bošković. The whole architectural complex in Baroque style in the heart of the historic part of the city is one of the most beautiful in all of Croatia. 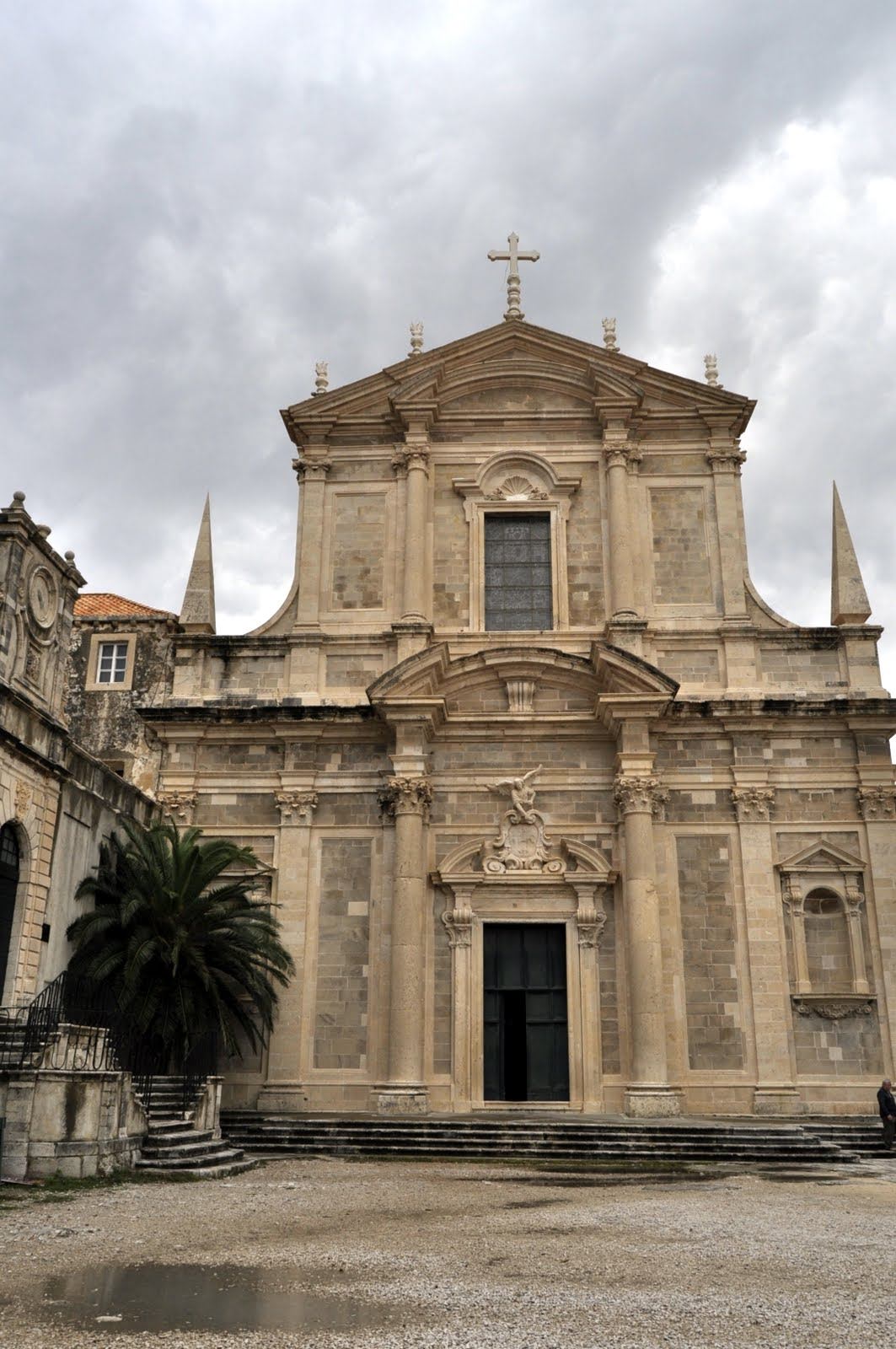 In place of the main shopping street of Dubrovnik once lapped the waters of the Gulf that separated the island of Ragusa from the coastal settlements of the Slavs.
Over time, hard-working and enterprising citizens filled the Bay, and the place paved with marble slabs.

So, the city acquired one street, which housed the trade shops and stores. A real decoration of the historical streets become two fountains and cozy cottages, built in local traditional style.
A favorite place of walks of local residents and tourists. There are many souvenir shops, and cafes and restaurants you can taste dishes of national cuisine. 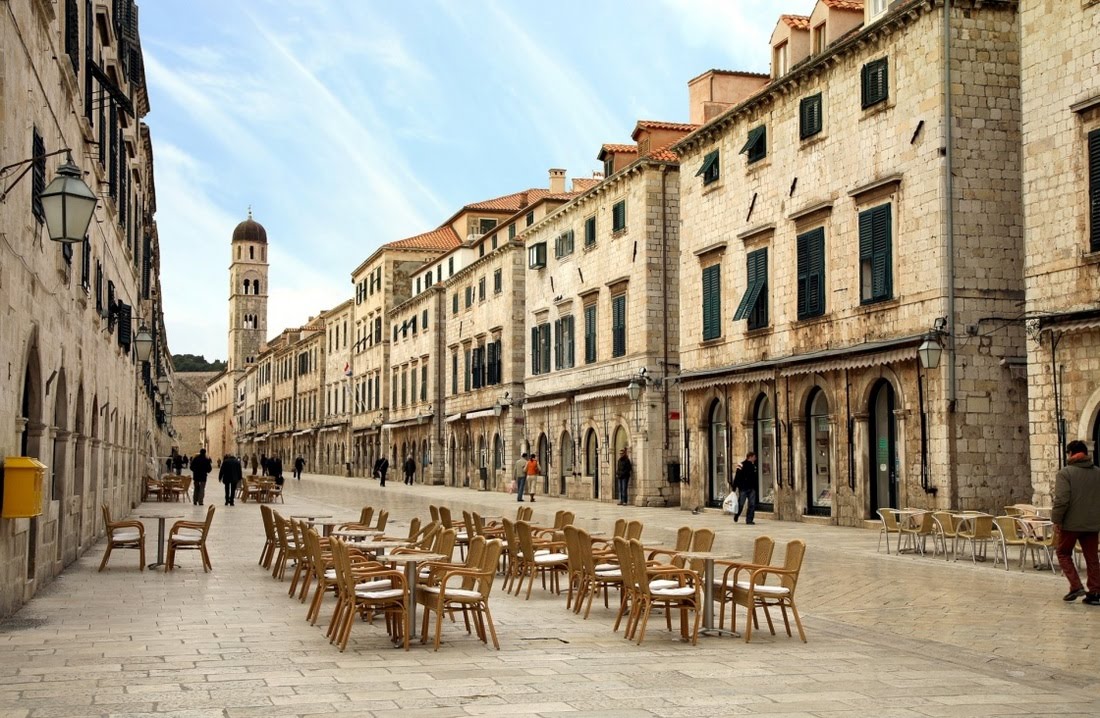 Historical symbol of the Croatian resort Minceta tower is the highest point in the Northern part of the fortification walls, and the first building appeared in this place in the year 1319.
In the middle of the XV century on the city became to rise a round stone tower, built according to all rules of fortification architecture of Medieval Europe. In walls, the thickness of which reached 6 m, were made loopholes for review and firing.
To complete the work were invited architect from Zagreb Giorgio Yes, Sebenico, which made the tower higher, and strengthened its base. 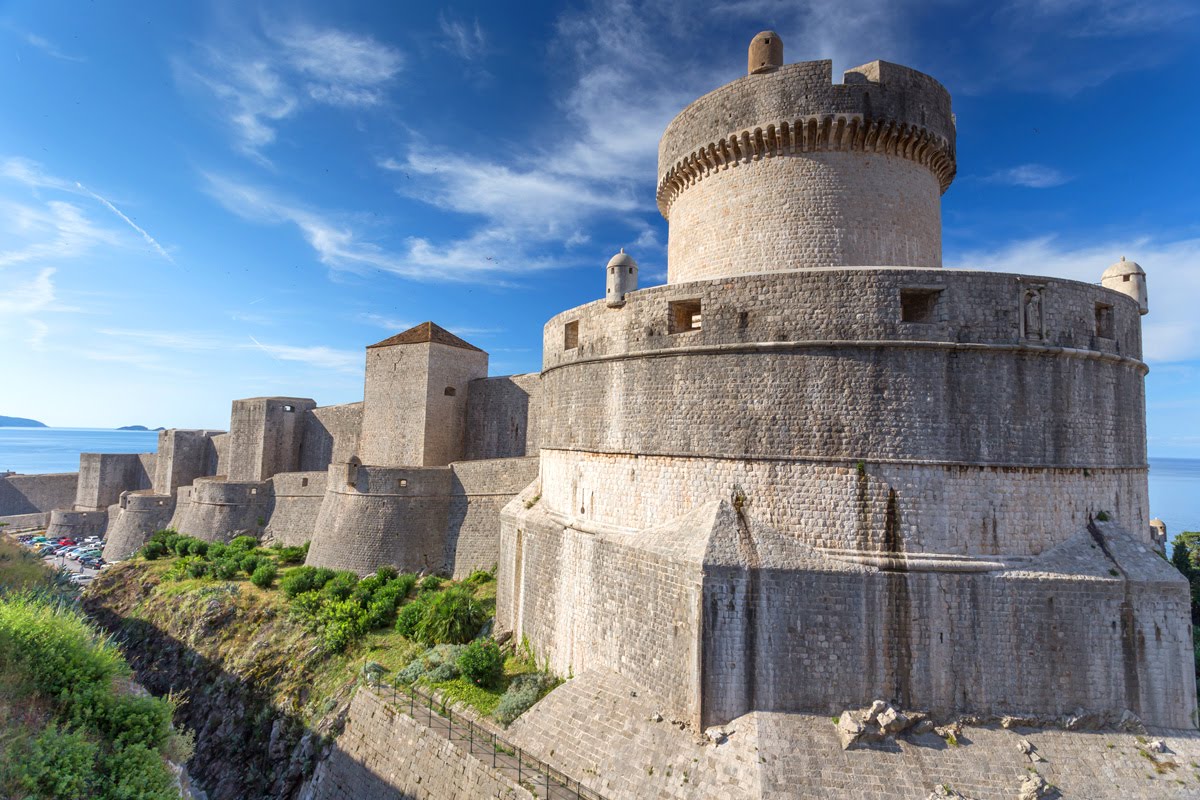 A beautiful castle on a rock, which the guides identified as Fort lovrijenac, and in Russian it sounds Lovrijenac, called "Dubrovnik's Gibraltar".
Indeed, it is situated on a high rock, jutting far into the sea. This unique architectural complex consisting of a defensive tower and theatre. The Fort played an important strategic target to protect the city, and the theatre has collected thousands of spectators in peacetime.
Unique and architectural structure of the Fort of St. Lawrence, consisting of three terraces, towering at a height of 37 m above the waters of the Adriatic sea. 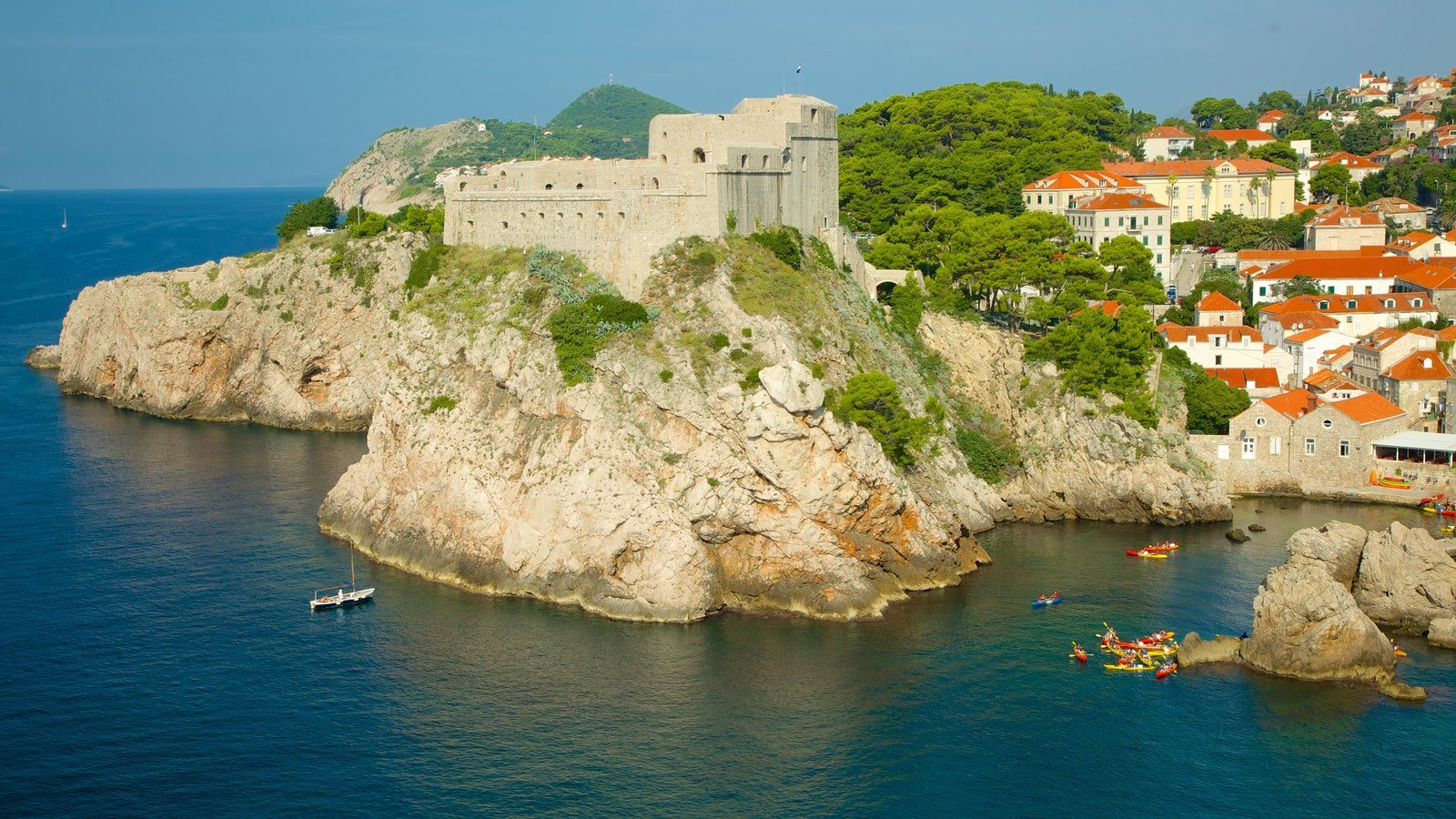 The Fortress Of St. John

On the map of Croatia in Dubrovnik is most fortifications of the middle Ages, which includes the fortress, named after the most revered Saint of the southern Slavs.
Erected it at the beginning of the XIV century, and the main function was protection from pirates and enemy ships. During the XV-XVI centuries, the fortress was rebuilt several times and the entrance to the port was blocked by the powerful chain stretching between the two banks of the Gulf.
Today, the walls of the medieval fortress houses the Maritime Museum. And on the first floor is an aquarium with unique and rare species of fish and marine life. 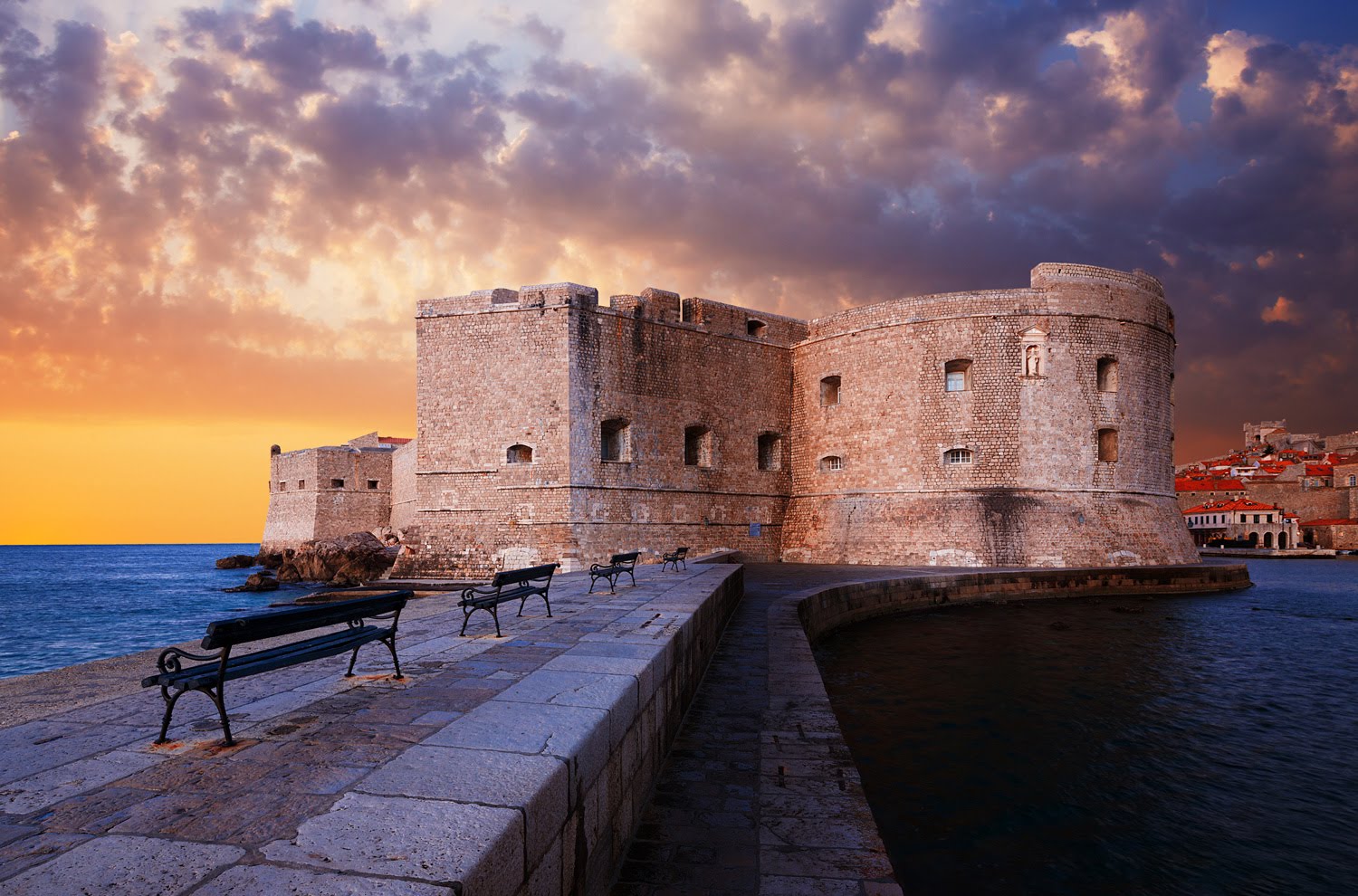 Beautiful Palace, which housed the Prince's residence, was built in the XV century. The architecture combines the elements of Gothic and Early Renaissance, which makes the building unique and incredibly beautiful.
The facade is decorated with a majestic colonnade and large stained glass Windows. The building has repeatedly suffered from fires, the fighting and the numerous earthquakes, but still survived to our days.
In front of the building is a monument to the sailor Pracata who died in the seventeenth century, and wrote to all his vast fortune Dubrovitsky Republic. Now in a historic building, is located the exposition of the city Museum. 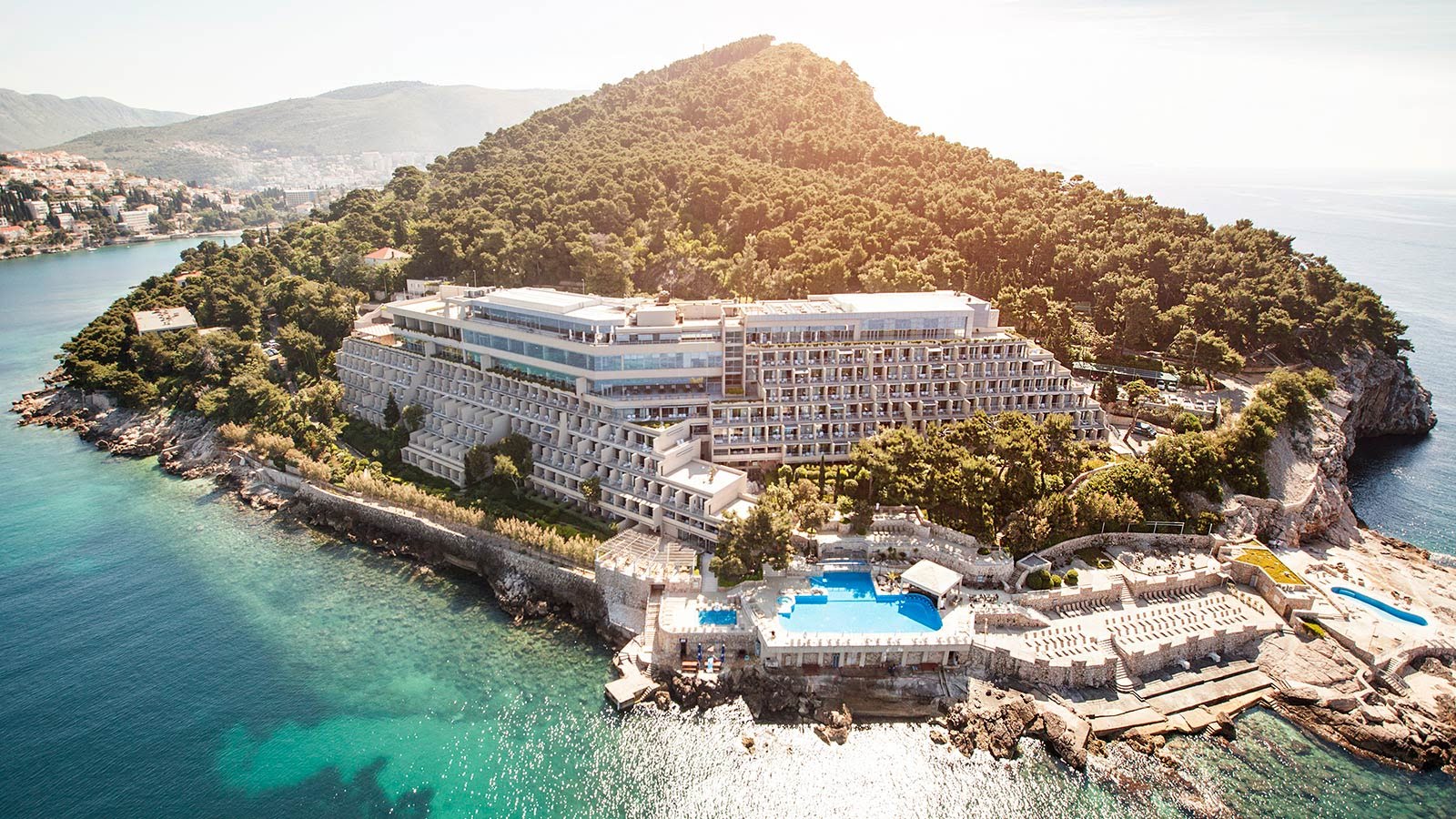 To get from the West in the old town through the gate of pile, and it begins with them acquainted with the monuments and the beauty of the city.
Once upon a time this place was a tower, the destruction of which in 1818, leaving only the gate. The gates themselves represent a unique example of the Renaissance, and above them stands a statue of Blaise of Sebastia, the patron Saint of the city and its residents.
The gate is a stone bridge with three arches. Interestingly, gates and today can be locked with a key and stored this amazing artifact in the Duke's city Palace. 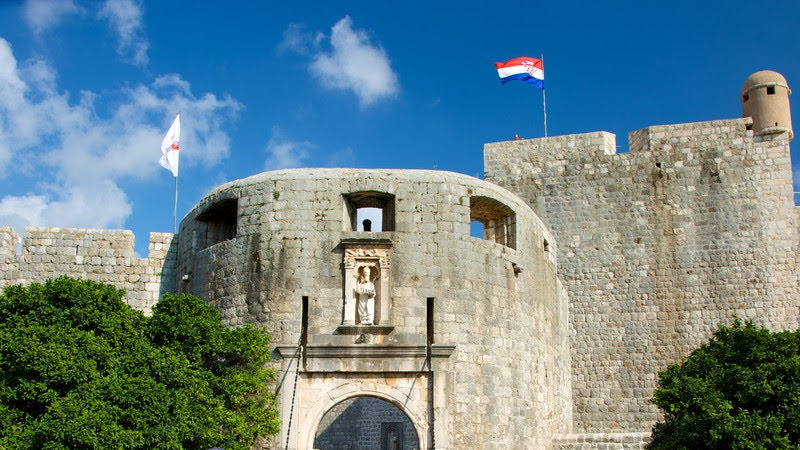 Historically, the Balkans have become the crossroads of various doctrines and religious beliefs.
In the XIV century in the city was erected, which to this day preserved the southern portal and the majestic tower. Reviews about this monument of architecture is full of enthusiastic epithets.
To explore the beauty of the monastery with the gorgeous interior can be independently and in a group, where the guide will tell the history and interesting facts. 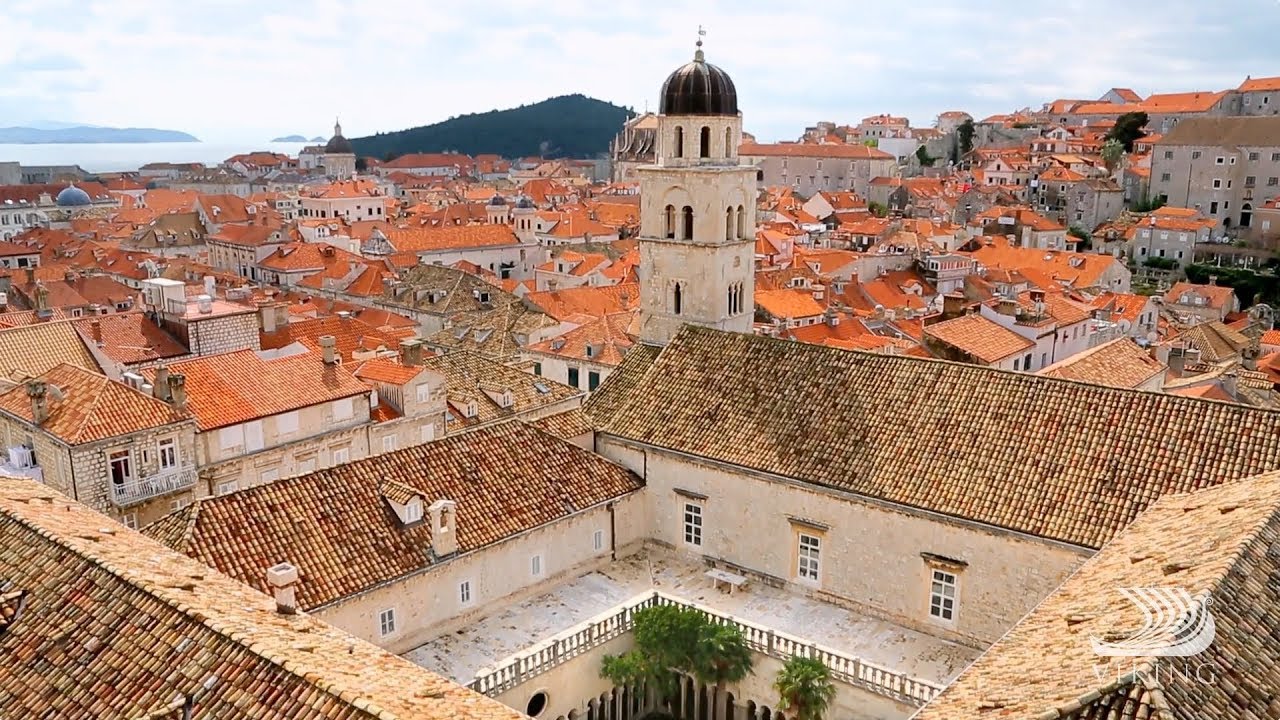 Speaking of monasteries, and presented their photos, you can not pass side and the monastery of the Dominicans.
His monastery they built in the XIII century, was rebuilt several times, until he grew up that such a wonderful building in the Baroque style. The main shrines of the monastery is the crucifixion, fresco work by Paolo Veneziano, located above the Central altar.
Today it is not just an architectural monument, but also a unique art gallery, which contains masterpieces of Venetian painting and Dubrovitsky masters of the XIII-XVII centuries. 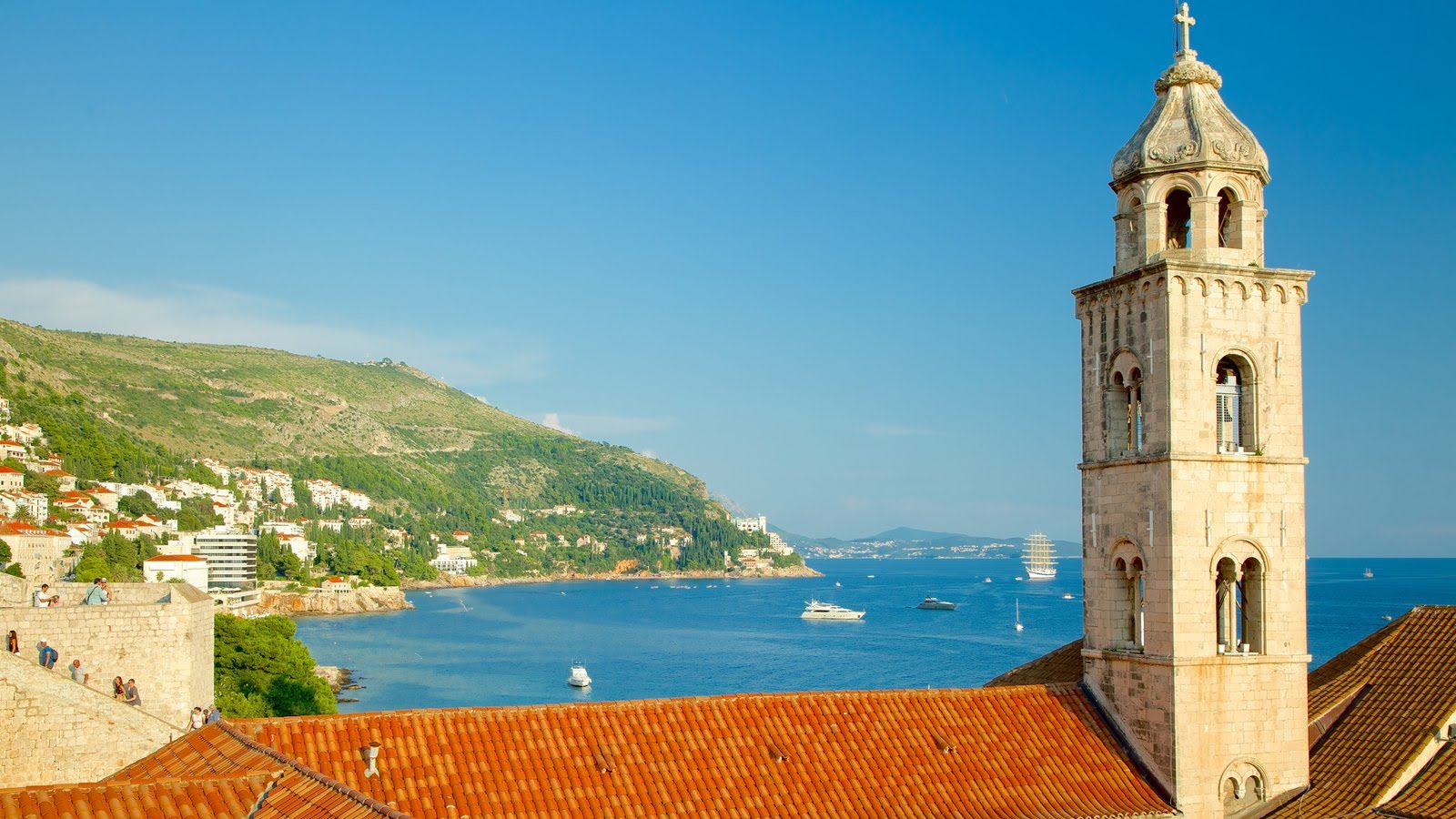 Near the harbour is a complex of ten buildings of brick and five cozy patios overlooking the sea on the rocky ledges.
In the Middle ages the seaside town was an important trading center, which operated a large market and yearly fairs were held. Goods were brought from different parts of Europe and Asia, and the city authorities, fearing epidemics, built in 1590 quarantine infirmary.
Over time, the structure lost its original purpose, and now hosts live entertainment and one of the houses opened a Museum "Otok". 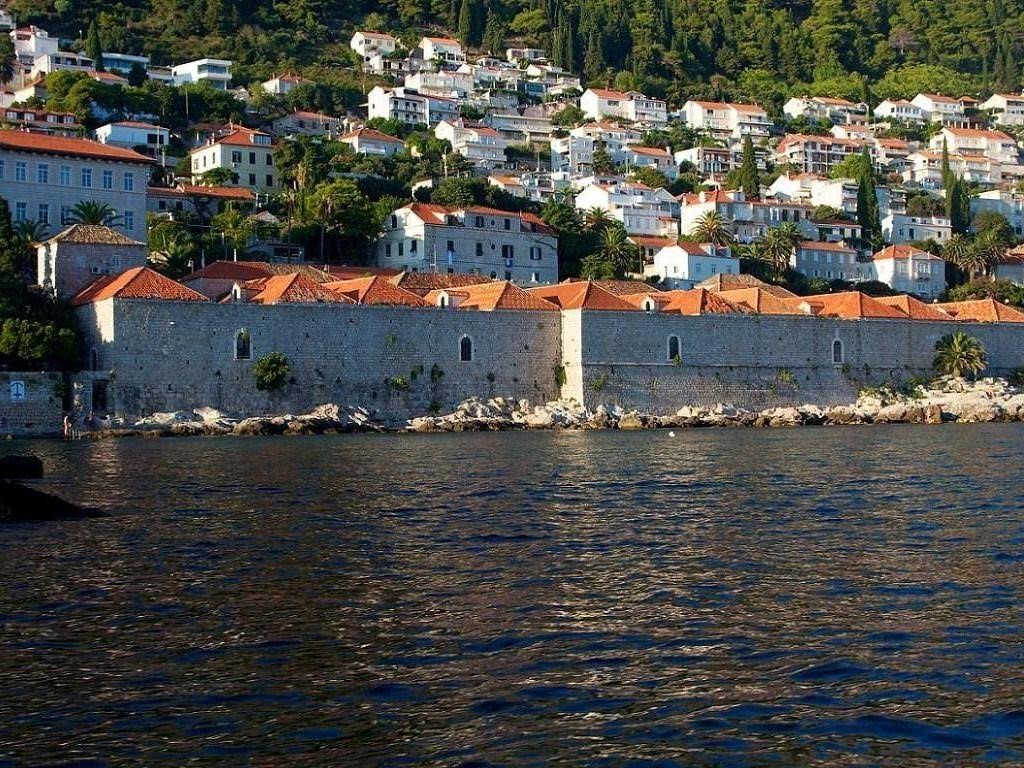 The name of the fortress comes from the name of the additional fortifications "Ravelin", and erected a Fort to protect from attacks from Venice in 1456.
Through the century the city authorities decided to strengthen the defense, and in 1538 opposite one of the gates rose a new, more powerful construction. During the strengthening of the Fort, forbade any construction of the stone, as all the material went into the construction of the fortress.
A unique monument of the fortification has the shape of an irregular quadrilateral, and the walls on the sea side is a little lower compared to fortifications on land. 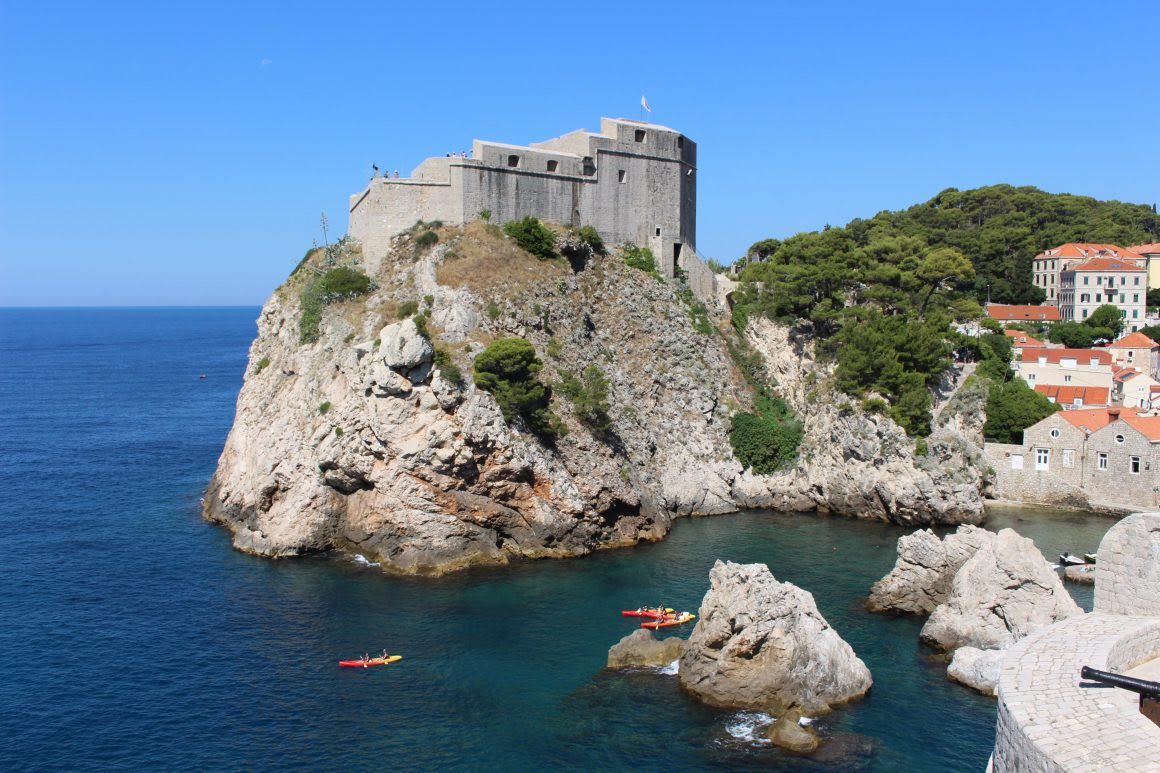 The Church Of The Holy Saviour

In the beginning of XVI century in this part of the Balkan Peninsula occurred earthquake, but most of the city was not injured. In honor of this miraculous rescue, the city authorities decided to build a Church.
In 1520, construction began, and after a few years within its walls occurred the first services. It is noteworthy that Church. Of our Saviour stood during the strongest earthquake of 1620, which was a miracle, so many buildings were virtually destroyed.
Gothic building decorated with traditional Gothic window-rose, and in front of the Church is pleasing to the eye Big Onofrio's fountain, which has been functioning since the middle of the XV century. 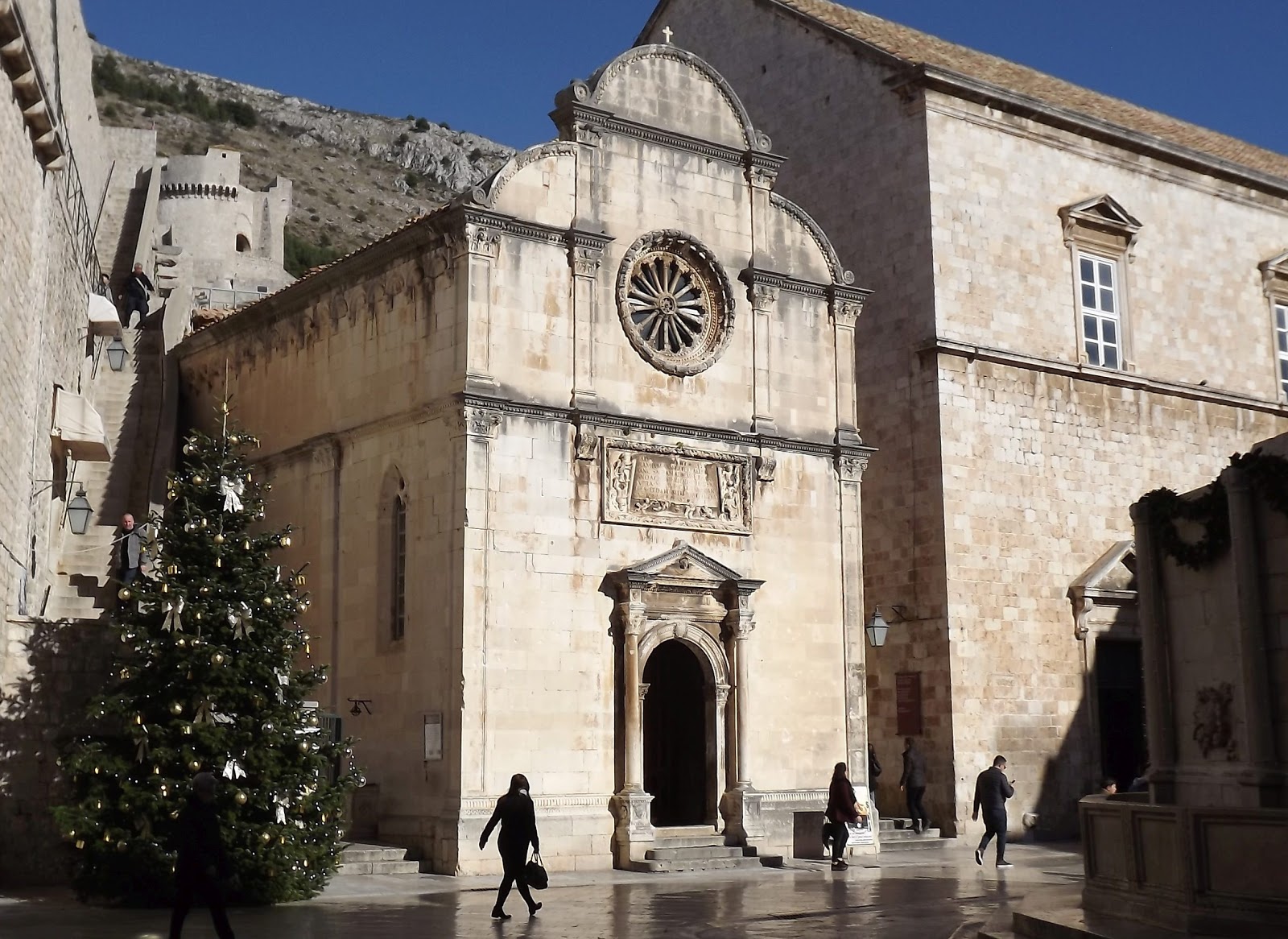 The author of the project of the Cathedral built and consecrated in honor of the assumption of the virgin Mary, was a famous Roman architect Andrea Bufalini, and helped him Italian architects.
Built it at the turn of XVII-XVIII centuries in the majestic Baroque style, but finished the refurbishing of the main elements of the local master Ilya Calcic. This is why the Cathedral incorporates the generally accepted elements of world architecture and local traditions.
One of the legends says that the new Cathedral was built on the site of the Church, which ordered to build here Richard the Lionheart landed on these shores, returning from the Crusades. 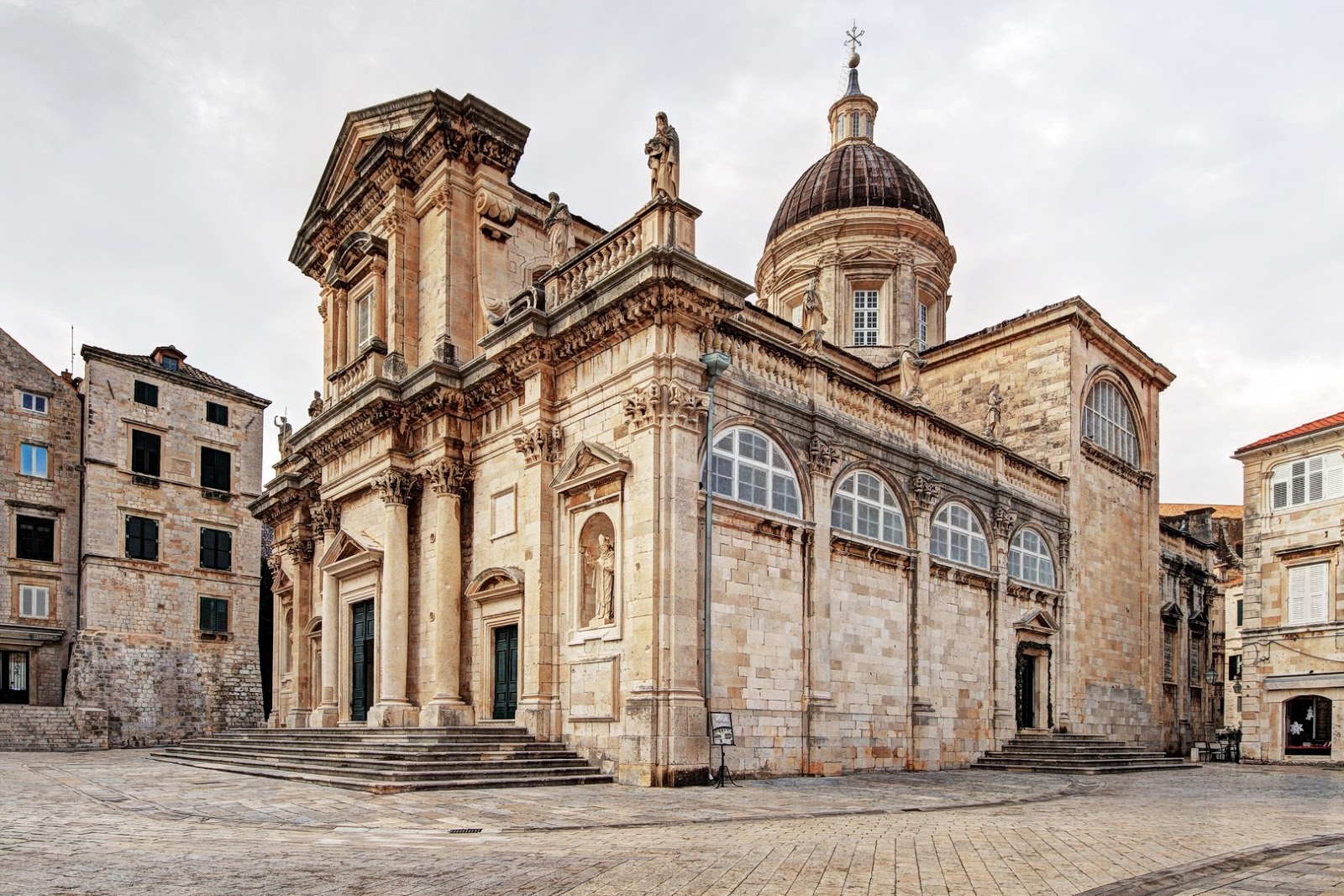 A unique Museum is located in a building of the XVI century, and formerly used as a huge granary.
In the rock cut 15 wells, of which, indeed, is the Museum. The walls are covered with plaster, no leaky. Here are household items, decorative arts, costumes and kitchenware. The Museum is interesting because it contains artifacts from different historical periods starting from early middle Ages.
On the ground floor and unusual Museum is constantly working exhibition of folk art of Croatia, which contains unique and rare exhibits and items of decorative art. 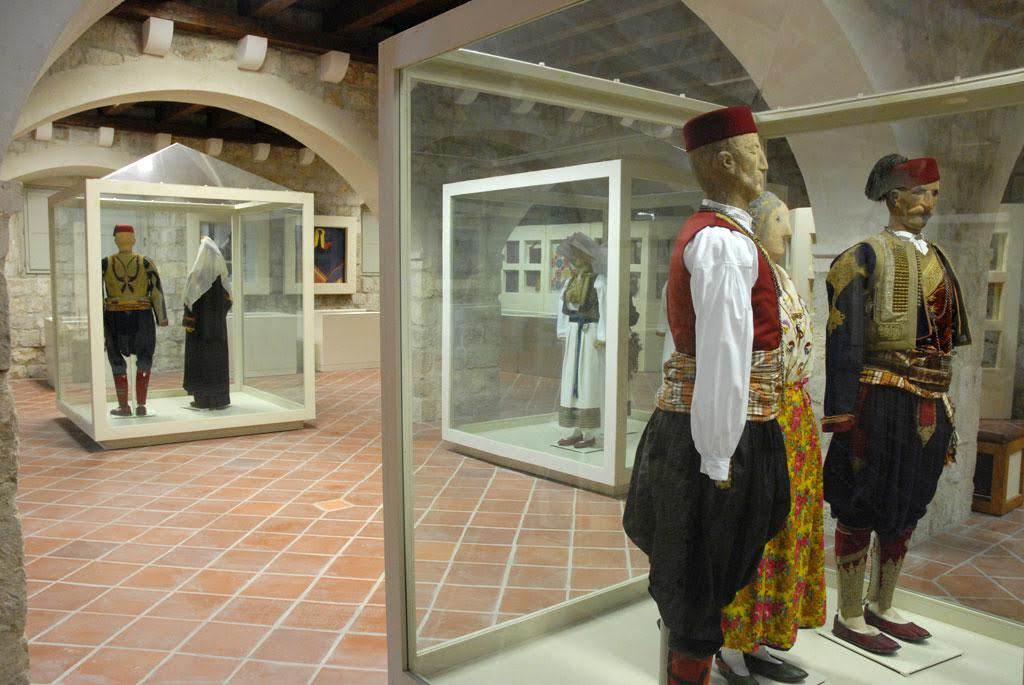